The Women's Golf Association of Western Pennsylvania ("WGAWP") was founded in 1922 and is the administrator of women's amateur golf in the region.  We are a non-profit organization made up of 40 golf clubs and approximately 600 individual members.  The purpose of the WGAWP is to promote among women of Western Pennsylvania the best interests and true spirit of the game of golf and to regulate and govern all contests in which members participate.

We are governed by a nine member executive board and have a Tournament Administrator on staff.

We conduct more than 20 tournaments each year which include the Women's Golf Association of Western Pennsylvania Championship.  In 2022 the 98th Championship, including the Bobby Cruickshank qualifying round, will be contested at Oakmont Country Club.  In addition, we hold Team Matches in May, four Mixed Events and over fifty Open Days throughout the season.

The WGAWP promotes the spirit of the game of golf for junior amateur girls through mentoring, demonstrating integrity and sportsmanship and providing instruction and competitive opportunities.  A Junior Clinic hosted by Carol Semple Thompson will be held at Oakmont Country Club on Wednesday, May 4, 2022 from 5:00 - 7:00 p.m.  Devin Gee, Head Golf Professional at Oakmont Country Club and his staff as well as other local PGA Professionals will provide hands on instruction in every aspect of the game.  Go to the "Juniors" tab on the homepage for more information.

In conjunction with West Penn Golf Association, Course Rating Teams are available to rate courses and are authorized by the USGA to issue both course and slope rating for both member and non-member clubs.

In 1903, the Oakmont Country Club was chartered. The co-founders were Henry C. Fownes and William A. Nicholson.  Mrs. J. Raymond “Nettie” Price, founder and first president of WGAWP, was the daughter of William Nicholson.  Nettie learned the game of golf from these two founders.  In 1899, the men of Oakmont, along with others from other clubs—Allegheny, Pittsburgh Golf Club, Edgewood Golf Club and Edgeworth, formed the Western Pennsylvania Golf Association.

Nettie Price learned the game of golf quite well from Henry Fownes and her father, William Nicholson. However, in those days, women golfers were not doing much. Oakmont officers suggested to Nettie that the women with guests from other clubs have a tournament. Prizes were awarded by Oakmont. After several tournaments, the Oakmont officers made another suggestion—an organization for women golfers—and in 1922 The Women’s Golf Association of Western Pennsylvania was formed.

Nettie Price called upon one of the city's most prominent attorneys, James Francis Burke, to draw up the bylaws. Though the records list Mrs. Price as the first president, Mrs. Price said “I was just president until we could meet and have an election.  Mrs. E. Ellsworth Giles really was the first elected president.”

Nettie Price was born in 1880. Her early days coincided with the beginnings of golf in this area and the two grew up together. Before World War I, as early as 1912, Nettie Price won the Womens’ North and South Championship at Pinehurst, N.C.  She won the first championship of the newly formed WGAWP in 1922 and demonstrated here superiority by repeating in 1923, and 1925.

Nettie Price, in her 50’s suffered the misfortune of arthritis in her hands and was forced to the sidelines. Her interest in the game never abated, and for almost a half century after her personal triumphs, she continued to be a familiar figure at principal events and offered much support and encouragement in the associations’ activities. In 1973, at the age of 93, the association lost a distinguished and cherished friend.

The original board members included: 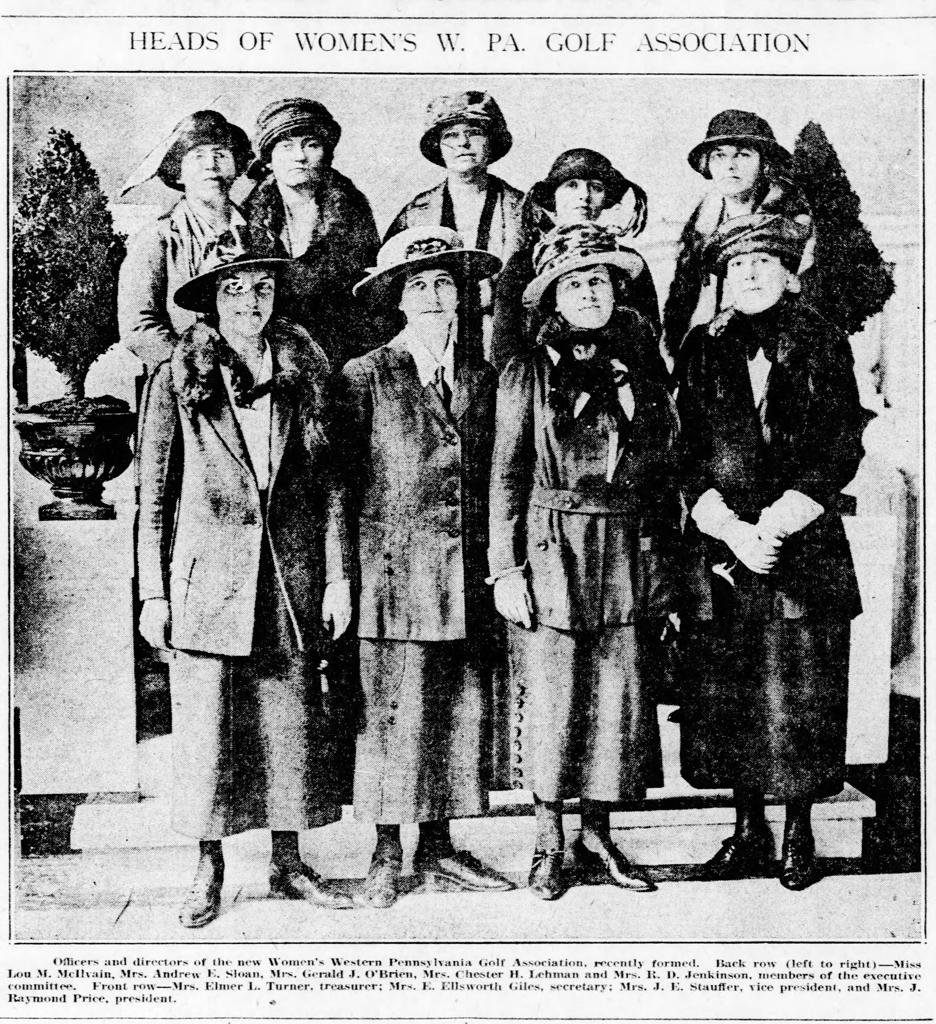 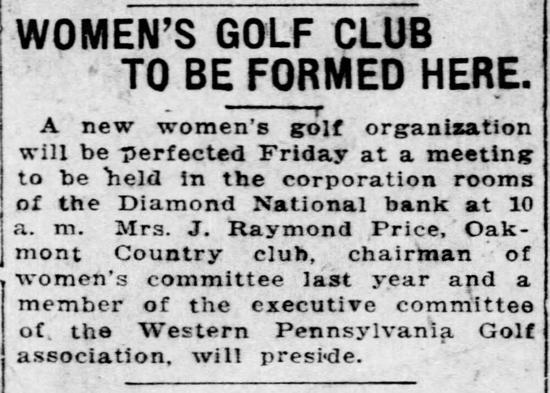 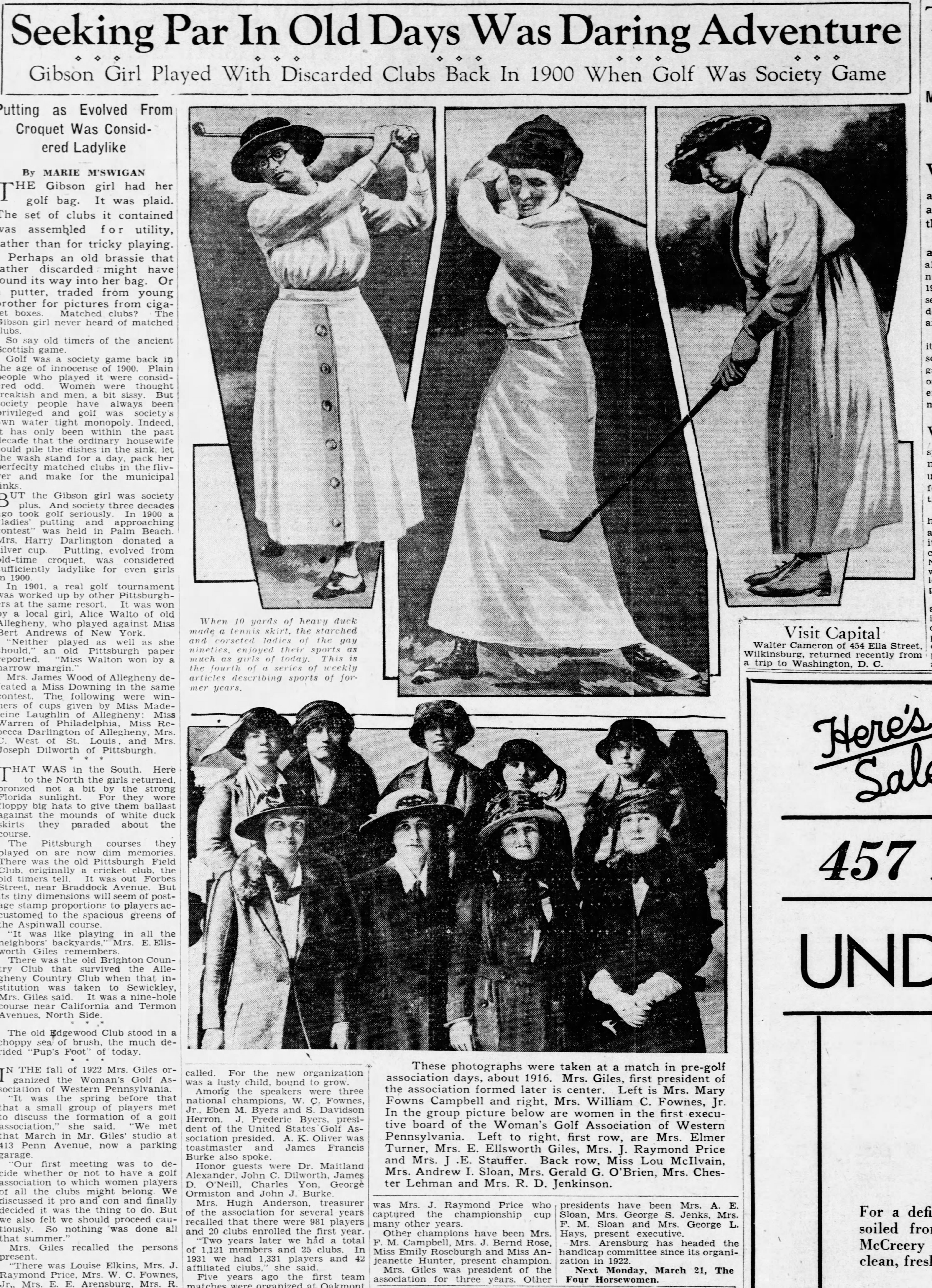 1938 Newspaper article about Nettie Price that summarizes her golfing career.

1938 Article as Nettie was "retiring" her clubs